Graduated from Kunitachi College of Music in Japan, in 2012, she held her debut concert in Wiener Konzerthaus. Thereafter, she participated actively in the field, co-starring with principal musicians of Vienna Philharmonic Orchestra and as a soloist dometcially and internationally. She also puts tremendous effort on holding charity concerts, including Princess Diana Memorial Concert at the English Ambassador's Residence in Japan, the charity concerts with the official invitation of the Sri Lanca Government.

Also her activities range from her original compositions that take inspiration from factors of nature such as water and a forest. In 2013, the movie " Pecoross' Mother and Her Days" in which,she composed and gave a performance of the movie theme music, was awarded the first prize in the Japan's Kinema Junpo Best Ten Films, and the latest movie "Harmonium" in which, she participated performing a composition, won the Jury Prize in the 2016 Cannes Film Festival.
She is now becoming increasingly captivating to the public, being considered as a one-of-a-kind pianist who creates a world of new classical music with beautiful water-like translucent tone colors, passionately transcendent techniques on a show-style stage. 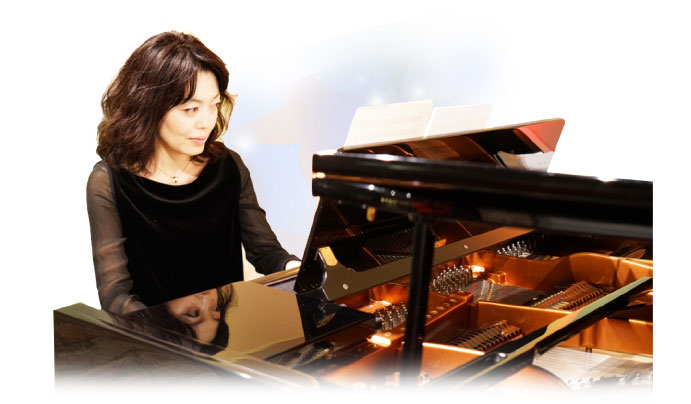 In 2002, she released the CD "Ondine " recorded live in Wiener Konzerthaus.

In 2006, she performed and recorded the fantastic story CD from her own poems "Crystal Fantasy" with a Bösendorfer Swarovski model crystal piano was released by Universal music.

In 2010, the " Chopin de cristal"CD in which,Chopin's pieces were arranged into piano concerto style with orchestra,was released by King Record. The whole CD was adopted by ANA International Lines as the official audio for their entire lines.

In2012 , the "Cristalier ", with the theme of a combination between Western and Japanese traditional music, was released by King Record. The incorporation of Japanese drums and flamenco played by world famous artists into classical music and the musical arrangements based on her idea was so novel that it has been attracting a lot of attention.
It proudly earned very high rankings in the classic category on iTunes.

In 2014, CD"Slow Bach"～Listen with your heart, 15 piano therapies～in which,she did musical arrangements and compositions on theme of "Bach in the forest",was released.
It is said to have healing effects and, as an exceptional artwork in the classic world, has been a hit ever since.